“My work in film involves a deep quest to understand our place in the world, and the relations of people to each other in our efforts to coexist. Whether set in a landscape of post-war, healing or physical isolation, my films capture the raw emotions of those individuals and communities directly impacted. I achieve this by testing what I believe to be the limits of the emotionally and psychologically bearable, mixed in with a no-nonsense anchor into reality. This combination creates a unique voice which translates into all the films I have made—from post-genocide Rwanda to extreme Antarctica to post-Sandinista Nicaragua—and gives each viewer the power to evoke this quest on their own terms.”
—Anne Aghion, Director/Producer 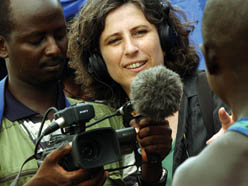 Franco-American documentary film director Anne Aghion (C)talking to a prisoner awaiting his release in a solidarity camp in Ntongwe (Gitarama Province), April 16, 2003. With her, is Rwandan cameraman James Kakwerere (L) on the first week of the shoot of her second film on the Gacaca and riconciliation process in Rwanda.

Multiple award-winning filmmaker Anne Aghion has been praised by critics both as a director of unique and poetic vision, and a documentarian who conveys a strong sense of the people and places she covers. Her work has earned her, among other honors, a Guggenheim Fellowship, an Emmy, the Human Rights Watch International Film Festival’s Nestor Almendros Award for Courage in Filmmaking, an Arts & Literary Arts Residency at the Rockefeller Foundation’s Bellagio Center, a MacDowell Colony Elodie Osborn Fellowship, and a UNESCO Fellini Prize. Her most recent documentary, My Neighbor My Killer, capped nearly ten years of filming the Gacaca (pr. ga-TCHA-tcha) justice process in post- genocide Rwanda. There, Aghion charted the emotional impact of a system of local open-air courts that adjudicated genocide crimes, and returned killers to their homes in exchange for confessions.

My Neighbor My Killer is one of the rare documentaries to be accepted in Official Selection at the 2009 Cannes Film Festival. Since then, it has been invited to screen across the globe. It is the feature-length companion to a trilogy of hour-long films. Gacaca, Living Together Again in Rwanda? (2003), and Emmy-winner In Rwanda we say… The family that does not speak dies (2005), have aired on television internationally. The final chapter, The Notebooks of Memory, was completed in 2009.

Beyond their success as documentaries, the Gacaca Films are recognized as a vital tool for understanding Rwanda’s bold experiment in social reconstruction. They have also had impact on the ground in Rwanda, where they have been used by NGOs for community-based training, and most remarkably, were screened for tens of thousands of confessed genocide killers before their release from prison.

Philip Gourevitch, author of “We Wish to Inform You that Tomorrow We Will Be Killed With Our Families, Stories from Rwanda,” has said of Aghion’s work that it “captures quite precisely much of what is most compelling and unsettling about Rwanda’s quest for justice after genocide.”

Moving in an altogether different direction, in 2008, Aghion released Ice People, a documentary feature that explores the physical, emotional and spiritual adventure of living and conducting science in Antarctica. Filmed “on the ice” over the course of four months, it was described by Variety as “staggeringly beautiful,” and received critical praise from publications as diverse as the The New York Times, USA Today, ArtForum and EARTH Magazine.

Currently in early stages of development are film projects that will take Aghion to the Indian subcontinent, and a multi-media art installation that will draw on her experiences in Antarctica and New Zealand.

Aghion splits her time between New York and Paris. She holds a degree in Arab Language and Literature from Barnard College at Columbia University in New York. Before making films, she spent close to a decade at The New York Times, and then at the International Herald Tribune in Paris.

Aghion is co-founder and Honorary President of IRIBA CENTER FOR MULTIMEDIA HERITAGE in Kigali, a place where all Rwandans will have access to the country’s audiovisual history.

To learn more about Anne Aghion and her other films, visit her website www.anneaghionfilms.com.