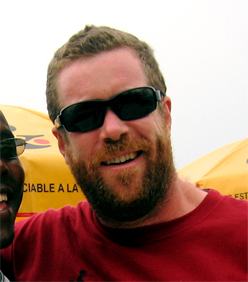 Richard Fleming, sound recordist for My Neighbor My Killer, has worked with director Anne Aghion on the Emmy-winning documentary In Rwanda we say… The family that does not speak dies, and on The Notebooks of Memory, the final chapter of the Gacaca Trilogy, as well as on Aghion’s groundbreaking documentary, Ice People. Since 1990 Fleming’s film work has brought him to the farthest reaches of the globe. He has camped the frozen deserts of Antarctica, accompanied Kofi Annan around the world, flown missions over Kandahar with the U.S. Army Reserve, followed Imelda Marcos on the presidential campaign trail in the Philippines, and sweltered on the decks of a nuclear aircraft carrier plying the waters of the Persian Gulf. Among his numerous documentary credits are the upcoming Half the Sky, for PBS, based on Nicholas Kristof’s and Sheryl WuDunn’s award-winning book, Marina Abramovic: The Artist is Present, by Matthew Akers and Jeff Dupre, Granito, How to Nail a Dictator by noted director Pamela Yates, From Kansas to Kandahar, by director Cal Skaggs for the PBS series America at a Crossroads, Show of Force’s Carrier, and Kofi Annan: Center of the Storm, by David Grubin, both for PBS; Sumo East and West, by Ferne Pearlstein, and Iron Butterfly, The Story of Imelda Marcos, by Ramona Diaz, both for ITVS. Other credits include Les Illuminations de Madame Narval, by Charles Najman, for the Franco-German television channel ARTE, and work as both a writer and recordist on Alex Wolfe’s “Santo Domingo Blues.”

Fleming is also an accomplished writer, photographer, and amateur musicologist. His blog, A Brooklynite on the Ice, features the filmmakers’ adventures during the four-month shoot in Antarctica. His book, Walking to Guantanamo, and the companion volume of Photographs, “The Road to Guantanamo,” chronicling Fleming’s year-long walk across the island of Cuba, have garnered glowing critical praise.