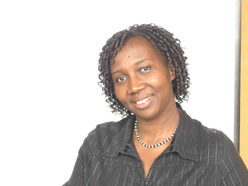 A native Rwandan, Assumpta Mugiraneza moved to France to train in clinical psychology and political science, but following the 1994 genocide, shifted to social and cognitive psychology. Her research and writings have focused on the hate language of genocide, in particular comparing Nazi and Hutu Power hate speech. While teaching in Paris, she began working with Anne Aghion as the principal translator for the director’s award-winning series of films. She returned to Rwanda full time in 2007 and the following year organized an international conference in Kigali on Speaking, Thinking and Writing the History of the Genocide, the proceedings of which she then co-edited in a special issue of the Revue d’Histoire de la Shoah in Paris, on Rwanda 15 years after the genocide. In 2010, she created a pilot program for national screenings and community discussions of Aghion’s feature film, My Neighbor My Killer. She is currently the director of the Iriba Center for Multimedia Heritage, which she and Anne Aghion co-founded.