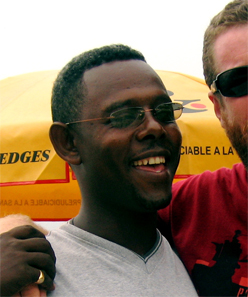 Jean Pierre Sagahutu has been working with Anne Aghion since her very first trip for her first film in Rwanda in 2000. At the time, he worked as an interpreter for many international journalists covering the conflict in the Democratic Republic of the Congo and the post-genocide reconstruction process in Rwanda. Since they first starting working together, Jean-Pierre Sagahutu has become one of the most sought-after interpreters in Rwanda, working regularly for numerous news organizations and on many narrative and documentary films as interpreter, driver and transportation captain.