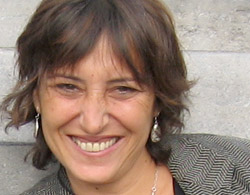 My Neighbor My Killer is editor Nadia Ben Rachid’s fifth collaboration with filmmaker Anne Aghion, following their work on Emmy-winner In Rwanda we say… The family that does not speak dies, the UNESCO Fellini Prize-winner, Gacaca, Living Together Again in Rwanda? and The Notebooks of Memory, the final chapter in the Gacaca Trilogy, as well as on the highly acclaimed Ice People, a feature-length documentary that explores the physical, emotional, and spiritual adventure of living and conducting science in Antarctica.

With the rare talent to work equally well with documentaries and features, Paris-based Ben Rachid has amassed dozens of film, television and commercial credits since 1997, including most recently Merzak Allouache’s Normal !, which won Best Arab Feature Film at the Doha-Tribeca Film Festival, Tarek Ben Ammar produced Dégage, a Chronicle of the First Arab Revolution, and Frédéric Chaudier’s Les yeux ouverts.

She has edited all the films by the world-renowned director Abderrahmane Sissako, including the 2006 feature, Bamako, which played at major showcases around the world, including the Cannes and New York film festivals. Following its stellar box office performance in France, the film was distributed to critical acclaim worldwide, including in the U.S. via New Yorker Films. In 1999, her work on Sissako’s Life on Earth earned Ben Rachid the Editor’s Award at FESPACO (Ouagadougou Pan-African Festival for Film and Television). The film premiered at Cannes and went on to collect numerous awards at festivals around the world, including the Golden Spire at the San Francisco International Film Festival.

Ben Rachid also worked with noted French director Yamina Benguigui, including on television series, Aïcha, her 2002 feature Inch’Allah Dimanche; the documentary The Perfumed Garden, which won Best Documentary for that year at the African and Caribbean Film Festival (Vues d’Afrique) in Montreal; and a segment of the acclaimed 1998 documentary Mémoires d’immigrés.

Among numerous other projects, she edited Michka Saäl’s 2005 Beckett’s Prisoners for the National Film Board of Canada; the 1999 documentary Woubi Chéri for award-winning documentarians Philip Brooks and Laurent Bocahut, which garnered Best Documentary awards at the New Festival in New York, the Turin Festival in Italy, and the Transgender Festival in London; and Rachid Bouchareb’s first feature, My Family Honor.