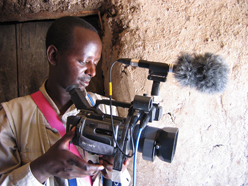 Cameraman James Kakwerere has been working with Anne Aghion since she first embarked on her Gacaca Series in 2000. Since 1998, he has worked at ORINFOR, the Office Rwandais d’Information, an umbrella group that oversees Rwanda’s news and media organizations, as a cameraman and photo editor. Kakwerere first met Aghion while she was researching her first film on the Gacaca and working on HIV-AIDS programming for USAID and Rwanda Television. As a native Rwandan and the only person behind the camera who spoke Kinyarwanda, he has contributed significantly to My Neighbor My Killer and Aghion’s three other films about the quest for justice in Rwanda.

When Kakwerere first began filming Gacaca, Living together again in Rwanda, he had been trained for television and had to learn how to create the longer, in-depth shots used in film. During the Gacaca Series he learned how to film with his ears as well as his eyes and integrate sound with the visual imagery. With the skills he accumulated working on the Trilogy, he was selected to film several major events in Rwanda, including a visit by the President of the World Bank. In addition to his work on My Neighbor My Killer, Kakwerere is now the lead cameraman at Rwanda Television.